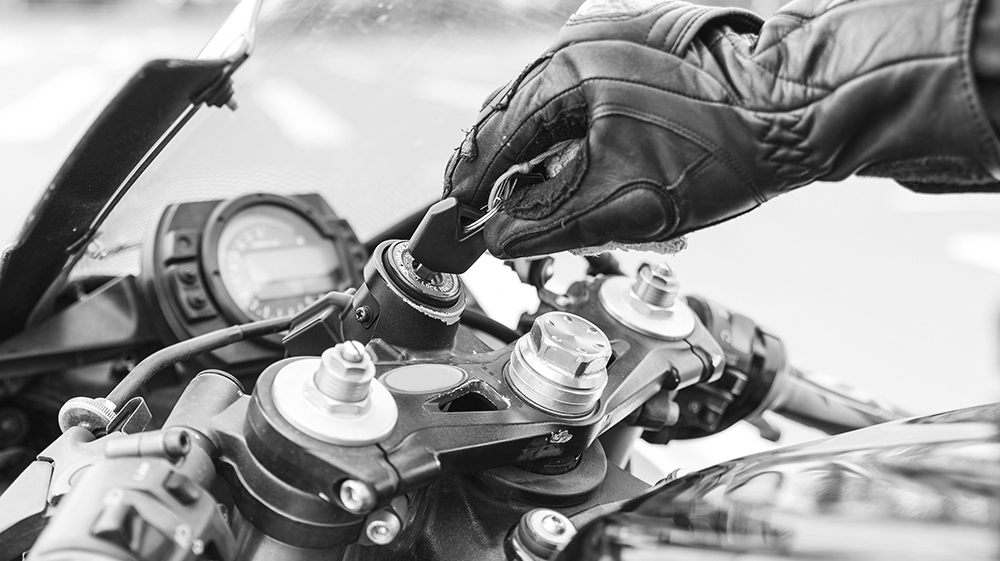 Motorcycles are brilliant fun to ride, but which ever way you look at it, they are not as safe as cars. To some people, that’s part of the appeal; living life on the edge and taking risks. Whilst this can be part of what makes riding a motorcycle rewarding at A2B we believe you should put your safety first.

Motorcycles, for obvious reasons, cannot include the safety features afforded to cars. For one, there is no exterior frame to absorb crash forces, so the forces of a collision are born directly by the bike and the rider. Neither do motorcycles have seatbelts, so there is an increased risk that the rider will be thrown off the bike in an accident. And then there’s the matter of being on two wheels. Motorcycles are simply not as stable as cars.

But, with common sense, riding a motorcycle doesn’t have to be an exercise in cheating death. There are a lot of things motorcyclists and drivers in cars can do to keep everyone safe.

Not only is it the law! But the single most important thing you can do to stay safe on a motorcycle is wear a helmet. Head injuries are the leading cause of death for motorcycle riders.

You also need to make sure you are wearing the right helmet. Sadly, lots of places sell inexpensive helmets that look good but don’t protect you. Always buy for Department of Transportation-approved helmet which have been tested and provide a minimum standard of protection.

In addition, make sure your helmet fits properly. It shouldn’t be too tight or too loose. It shouldn’t obstruct your vision, but it should cover most of your head. For more protection, opt for a full-face helmet with protection all the way around. A simple windshield can at least protect your face from bugs, rocks and rain, but a full-face helmet will have a piece that goes around your chin, so your face won’t make contact with the road.

This tip is more for drivers than bikers, but it’s so important that it’s worth mentioning here: Look for motorcycles. Motorcycles are small and tough to see. That means many drivers miss them, causing collisions that are often fatal to the motorcycle rider.

Keep your eyes and ears open for motorcycles. Lots of bikes have loud exhaust systems specifically to draw drivers’ attention. Use that to your advantage. But you still need to look out for quiet bikes. Look twice before changing lanes, and always check your blind spot. A bike may be there. Also, before pulling into traffic, look for motorcycles. They’re harder to spot than cars, but taking an extra second to look could save someone’s life.

For riders, look twice is still a good rule to follow. Never assume that a driver sees you. Ride defensively and take responsibility for staying safe around cars.

Part of the fun of having a bike is having someone on the back. Having a passenger with their arms around you as you cruise the open road can be quite romantic. But your passenger has a part to play in keeping both of you safe.

Make sure anyone you carry on your bike has the right gear. Like you, they should wear sturdy shoes and protective clothes. You should also practice having a passenger, especially if they’re bigger than you, in a safe place, like a parking lot. That will get you used to having the extra weight on the bike and the passenger used to how the bike feels, and how they need to move with you in various maneuvers. Make sure your passenger knows not to distract you, and what things like stopping and turning on a bike feel like, so they won’t panic. If you’re carrying a young child, check the laws of your state. In many states, you need to be over a certain age to ride on the back of a motorcycle.

Because they aren’t as stable as cars, riding a bike in the rain is much riskier than driving a car. With only two wheels, you have half the traction of a car. Plus, without windshield wipers, your visibility is compromised. Finally, riding through the driving rain can hurt.

When you’re preparing to go for a ride, check the weather. If heavy rain, snow or ice is predicted, leave the bike at home. If you absolutely must ride in the rain, don’t ride right after the storm starts. When rain first hits the road, it brings up oil and other residue, making the road extremely slippery. If you wait a while, the rain will wash away the oil and slick stuff it brought up. Give the rain time to clear the road for you. Then, when you’re on your way, be extra cautious. Go slowly, leave plenty of space for stopping, and if the weather gets worse, stop and wait it out.

One of the biggest mistakes drivers and motorcycle riders make is not leaving enough stopping distance for bikes. While it’s true that since bikes are smaller and lighter than cars, they need less space to stop and maneuver, they still need more than you might think.

Anti-lock brakes are still relatively new on many bikes, and older models don’t have them. That means that bikers can’t just slam on the brakes like a driver could. Their wheels would lock up, they’d lose control, the bike would drop and they’d go for an asphalt slide. Practice stops on your bike in a safe environment and know how much space you need. Then, make sure you give yourself that much space in traffic. Leave a generous following distance between your bike and the vehicle in front of you, and try to keep an escape route open to the side (onto the road shoulder, for example) if you can’t stop in time.

We all know distracted driving is a bad idea, but it’s worse when you’re riding a bike. One of the keys to staying safe on a motorcycle is staying hyper-aware of everything that’s going on around you. Remember, motorcycles are tough for drivers to see –especially drivers in large cars or SUVs. You need to see and avoid them, rather than bet on them seeing you. If you’re fiddling with your phone or iPod, you’re reaction time is cut by several precious seconds, putting you at higher risk of a collision. And running into a Chevy Suburban while going 60 miles per hour (96.6 kilometers per hour) is no one’s idea of a good time.

If you’re on a bike, remove all temptation for distraction. Don’t wear headphones, and put your phone where you can’t get to it.

7: Ride Within Your Skills

Riding a motorcycle is a skill, and like all skills, it’s something that you need to develop. While you may be fine to go on an easy cruise around town, it takes time to grow the skills you need to be an expert rider. To stay safe, make sure that you always ride within your skill level. Your friends who have been riding longer may be able to go super fast, weave in and out of traffic, or control their bikes on curvy roads, but that doesn’t mean you should. Take the time to build your skills and only ride in situations where you know your skills are up to the job.

Of course, you should still challenge yourself – that’s how your skills grow – but you need to do it in a safe, controlled way. Many motorcycle dealerships offer advanced riding courses where you can practice more advanced maneuvers. And, if you’re interested in motorcycle sports, it’s easy to find a racing school. Those schools are not only fun, but they help you safely build your skills so that you’re safer on the road.

The right shoes are also important to riding safely. To shift gears on a bike, you lift up with your toes – so open-toed shoes can become painful fast. Plus, when you’re riding a bike, you’re sitting on the engine and exhaust system, which get hot. It’s easy to burn your feet. Not only do open-toed shoes like flip-flops expose your feet while on a bike, they can slip off, causing a dangerous situation.

When riding a motorcycle, you want study shoes. Those shoes are the only protection your feet will have. Look for something with a rugged sole. Shoes with smooth soles make it easier for you to slip. When you’re at a stop and using your feet to balance, the last thing you want to do is slip and drop your bike. Motorcycle shoes should also have sturdy ankle supports and a low heel. You want something that makes it easier for you to balance. Look for shoes or boots in a durable material, like leather, for better protection.

9: Get the Right Gear

We’ve all seen people on motorcycles in shorts and flip flops. Those people are not being safe. Since a motorcycle offers little protection in a crash, what riders wear is part of the crash protection system. Even if you aren’t in a crash with another vehicle on your bike, you could simply lose control and lay the bike down. In that situation, you’ll be sliding along on asphalt. That’s not something you want to do in shorts.

There’s a reason a lot of bikers wear leather: it’s strong enough to protect their skin if they slide along the road surface. Plus, motorcycle riders are exposed to other road hazards, like small rocks, bugs and cigarette butts, that people in cars are protected from. At 60 miles per hour (96.6 kilometers per hour), even a small rock can sting. Leather gear can help protect you.

Of course, you don’t have to look like a reject from “Easy Rider” to ride a motorcycle. A lot of companies specialize in armored motorcycle gear, and it’s not all leather. You can get vented motorcycle jackets that keep you cool while keeping you safe. These jackets are made of lightweight, breathable material, but have heavy-duty amour panels in key places (along the spine, torso, shoulders and elbows) to protect the wearer.

In most states, if you’re going to get a motorcycle license, you need to take a skills test. In many states, you also have to take a motorcycle safety class – think of it as driver’s education on two wheels. Even if your state doesn’t require you to take a motorcycle safety course, you should. The class will teach you about the traffic safety laws that apply to motorcycles in your state, how to respond to emergency situations on a motorcycle, and give you a chance to try out your new skills in a controlled environment. The instructors will also give you tips about motorcycle maintenance and how to avoid unsafe situations. After all, the time to learn how to recover from a skid on a bike is not when you go into one for the first time. Taking a motorcycle safety course prepares you to hit the road safely and with more confidence.

The good news is, most motorcycle dealerships offer motorcycle safety courses, and some even give discounts or other promotional materials to people who have completed their course. If you’ve got your heart set on a particular brand of bike, taking a motorcycle safety class from that dealership is a good way to get to know the brand better, and you may even be able to try out some of their models.

Please enter the Page ID of the Facebook feed you'd like to display. You can do this in either the Custom Facebook Feed plugin settings or in the shortcode itself. For example, [custom-facebook-feed id=YOUR_PAGE_ID_HERE].